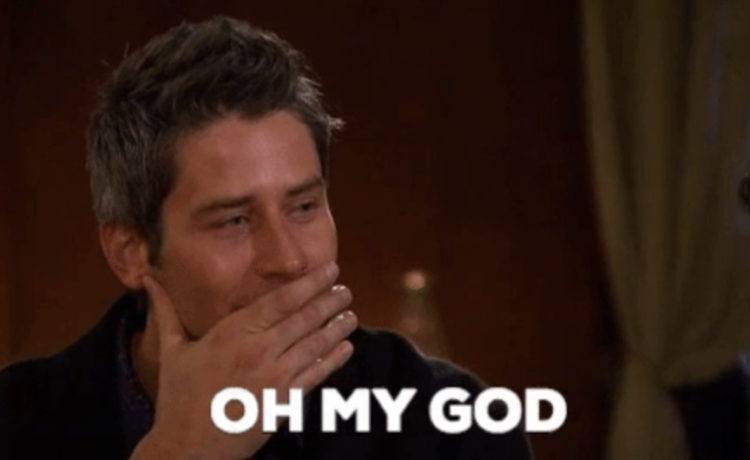 Good news, everyone! The Bachelor mansion needs to be bleached, which means this week the contestants are all off to beautiful Lake Tahoe. Arie is already in Lake Tahoe, staying at…the Hard Rock Hotel??? I CANNOT with this guy.

Seinne snags the first group date and sets off to parasail with Arie as the other girls all stare jealously through some conveniently placed binoculars. Seinne seems like a pleasant and intelligent person (and has a GREAT oversized denim jacket lewk today), but that doesn’t make for particularly scintillating television. Arie doesn’t move things along either, observing that Lake Tahoe is “so clear” and Seinne is “beautiful”. Boooooring.

But what does Krystal think? Well, based on the fact that Seinne is not Krystal, “Seinne is probably going home tonight and that makes me happy.”

Meanwhile, Maquel gets a phone call that her grandpa has passed away. She decides to leave the show…forever? For the funeral? It’s unclear. The rest of the contestants comfort Maquel and wish her the best, except for Krystal. Sure it’s sad about dead grandpas, but that’s one less girl for Krystal to compete with! Krystal is evolving from Gretchen Weiners to Regina George at an astounding pace.

During the dinner portion of the date – which is also AT THE HARD ROCK CAFE UGH – Seinne schools Arie about how the lack of representation of love stories featuring black women in culture and media made her question whether she would ever find love. It flies over Arie’s dumb spiky hair. He gives her the rose and hopes that “it’s the beginning of a love story!” Then he and Seinne pretend they’ve ever heard of a band(?) musician(??) called Lanco and awkwardly dance on a platform for the rest of the Hard Rock Hotel patrons.

The group date card arrives and it’s for everyone except Bekah with the Short Hair, meaning she gets the second solo date this week. Krystal stares at Bekah and silently places a curse on her and her family.

The rest of the ladies meet Arie in the woods of Lake Tahoe. It’s beautiful and somehow everyone has appropriate footwear for hiking! Kendall, the taxidermy enthusiast, is excited to be in the woods, surrounded by animals that are pre-taxidermy. A pair of extremely miserable looking survivalists/doomsday preppers meets the group and explains that they’re going to learn some survival skills, starting with drinking your own urine as a water source.

Look, I hardly ever go outside, but starting with “drink your own pee” sounds excessive. Like, wouldn’t it make more sense to learn how to build a fire or figure out what moss is poisonous or something first? Nobody questions the survivalists and happily tromp off into the woods to pee in water bottles.

This is so gross. Did anyone bring hand sanitizer?? Arie pretends to drink his own water bottle full of pee and the girls are prepared to do the same, but before anyone can take a sip it turns out it’s all a funny joke! Hardy har! Nobody washes their hands and the group moves on to essential survival skill #2, eating worms.

“I have definitely eaten bugs before,” says Kendall. Her and Tia chomp down some worms and maggots with Arie. Kendall pulls him into a picturesque forest clearing and they make out with their bug mouths.

Everyone gets to put their survival skills to the test as they split into groups and attempt to follow a map to a hidden hot tub. Krystal is paired with Arie and can’t stop smiling smugly about it. She cuddles up next to him in the hot tub as Caroline and Tia ASSAULT AND ATTACK KRYSTAL.

Post hot tub, everyone is wearing their best sweaters for the drinking portion of the date. Krystal steals Arie and tries sooooooo hard to cry about how the other girls “put a target on her back” and she’s just so nice to everyone yet they are so mean to poor lil’ her! Arie buys it, because as we’ve established, HE DUMB.

Feeling vindicated, Krystal confronts Caroline and Tia about how mean and awful they were to her. Tia almost laughs in Krystal’s face, because this is excruciatingly stupid! Krystal tries to muster up some more fake tears for Arie, but her face fillers are squeezing her tear ducts shut. It doesn’t make a difference, because Arie ends up giving Tia the group date rose.

The teasers for this season all promised a bombshell over Bekah with the Short Hair’s real age. I hoped against all odds that she was actually 40, but looked younger thanks to a great skincare routine. Or that she was doing a Dorian Grey thing and had a painting back at the mansion that was slowly becoming more withered and decayed. Alas, these theories were wrong.

The other contestants talk about this EXTENSIVELY all episode. There’s a 14 year age difference between Bekah and Arie, and in the eyes of the sage 27 year olds in the house, that’s too much. She is still a girl, not yet a woman, and not ready to be fake engaged to anyone.

Bekah and Arie ride horses around Lake Tahoe and take a dip in a conveniently placed hot tub in the woods. They make out a bunch. I am so tired of seeing this man’s tongue.

At dinner, Bekah and Arie talk about the future and how ready he is to settle down now versus how he felt in his late twenties. Which is the age Bekah is, right? Actualllllllyyyyyy…she’s 22.

Arie has a flash of terror and wonders if he could go to jail for all those tonguey makeouts. Bekah sips the wine that she is just legally old enough to drink and assures him that maybe she would be ready for marriage at the end of this show! Her siblings were all teen brides and it worked out fine! Arie isn’t convinced, no doubt thinking of the nastiness he got up to at age 22. Bekah asks if it would be worth it to fall in love even if it ended in heartbreak instead of marriage, to which Arie responds NOPE, I NEED A WIFE.

Ultimately, his reservations about the 14 year age gap are eclipsed by his sleaziness, so he offers Bekah the rose.

JK, Chris Harrison shows up and informs the ladies that we’re going right into a ROSE CEREMONY. Screeching intensifies.

Everyone lines up like they’re facing a firing squad as Arie comes to deliver the roses. He first calls –

NOBODY BECAUSE KRYSTAL INTERRUPTS THE ROSE CEREMONY.

Her and Arie walk off as the rest of the girls kick off their heels and sit down, collectively staring at each other like do you see this bitch?!!!?!?. Krystal has effectively burned all of her bridges interrupting this Rose Ceremony.

Krystal doesn’t have anything substantial to even sigh to Arie, other than she’s here for him! And that she respects the other girls so much AHAHAHAHAHA and she’s not playing games HAHAHAHAHAHAHA good one.

After that tirade, Arie hands roses to Last Lauren Standing, Kendall, Ashley (has she talked this entire season??), Becca with the Long Hair, Marikh, Drunk Jenna, Jacqueline (has she talked either???), Chelsea, and Krystal. That means it’s goodbye to Brittany and Caroline.

Next week: everyone gets along and friendship thrives. JK! It’s The Women of the Bachelor v. Krystal.

Episode 7: The Longest Episode Ever