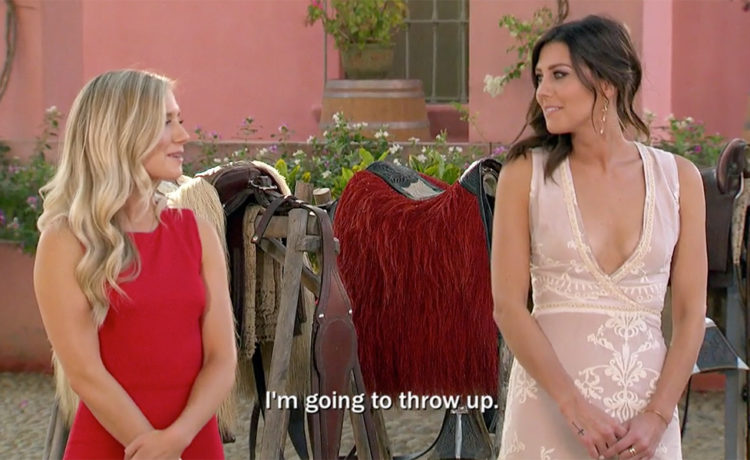 With the Winter Games being a much more enjoyable watch, I’ve neglected to cover the last few weeks of Arie’s Journey of Love®. Here’s what we missed:

Our final three contenders are Kendall, Lauren B, and Becca with the Long Hair. Arie has flown them all down to Peru, and it’s FANTASY SUITE TIME.

Oh, Kendall. Somehow, our taxidermy and ukulele enthusiast is still here. Because Arie only has one interest in life, they ride a dune buggy around the desert. “Dune buggies are a lot like love, there’s lots of ups and downs,” Arie notes.

Kendall is trying really hard to be in love with Arie. He likes her for her whole personality and not as some incredibly hot girl who happens to like the same things serial killers like! Why can’t she like him back? Could have something to do with the fact that Arie has no personality, or that Kendall’s only spent a total of 4 hours with him, or that he has two other girlfriends. Either way, Kendall psychs herself up enough to make out with Arie and check into a nice AirBnB for the first Fantasy Suite date of the episode.

There’s no way they end up together, so I skipped the morning part of their date and made some bomb Crispy Chickpea Tacos from Hello Fresh (please sponsor this blog, Hello Fresh)

If you’re wondering if we’ve seen any more depth to Lauren B…WE HAVE NOT. She is still basically comatose the entire time, and Arie still can’t get enough of her blinks and occasional sighs. This bitch gets a helicopter date over the freaking Nazca Lines and can’t make any remarks besides “wow” and “that’s amazing”. LAUREN B. COME ON. At least try and identify what the animals are! Or break out a conspiracy theory about how the lines are too irregular to be roads and must have been made by spaceships!

Despite showing no outward affection towards him, Arie is drawn to Lauren B. She tells him that this experience is so hard on her, because she needs to feel like she’s the only girl left in the harem of contestants. It’s just so hard she might leave, you know? Arie’s life FLASHES BEFORE HIS EYES. Lauren B has nearly ended him, and he knows he needs to impress her tonight.

At dinner, Lauren B makes brief eye contact with Arie and he proceeds to tell her how incredible and beautiful and blah blah blah she is and also HE LOVES HER. Like drops the full on “I love you”. Not I Could See Myself Falling In Love® like past Bachelors. Arie Loves Lauren B!

Her face doesn’t move, but Lauren B is filled with joy. She says “Well…I love you too” and insists to the camera that there are so many reasons she loves Arie that she can’t even name a single one! At that point Arie busts out the Fantasy Suite card and these two head to the bone zone.

The next morning they’ve both removed their fake eyelashes and are cuddling in bed. Gross! “I really don’t see Arie ending up with anyone but me,” Lauren B says smugly. SHARP CUT TO BECCA.

Becca seems like a normal enough person, but somehow she too has fallen in love with Arie. What do women see in him? He is essentially a pile of breadsticks in a golf polo. Plain breadsticks. Garlic breadsticks would be too spicy.

Becca and Arie get to ride a boat and look at harbor seals and birds. Fun fact: Arie is falling in love with Becca.

Wait, he’s already in love with Lauren B and told her so, but is also in love with Becca?? This isn’t Sister Wives, my guy! You can’t marry all the ladies. Becca tells the camera that she is going to tell Arie “I LOVE YOU” tonight, even though she knows he can’t say it back. A harbor seal moans in the distance.

The evening date takes place in a romantic yurt in the desert. Becca is like “OMG can I live here???” seemingly unaware that the desert is a house for scorpions and this yurt does not have a bathroom. Arie and Becca pretend to eat and she asks if he has any concerns about their relationship. “Not really,” Arie shrugs. REALLY DAWG? I would definitely say that “being in love with another woman” would rank pretty high on potential relationship concerns.

Becca stares into Arie’s blank face and confesses that she is in love with him. Arie maintains aggressive eye contact and says “I love you too.”

ARIE. GUY. Did you not watch Ben Higginses’ season where he told two women he loved them? That ended poorly! Last time we saw Ben Higgins he was having a breakdown at the Bachelor Winter Games because he ended up ALONE. Despite all logic and reason, Becca and Arie retire to their Fantasy Yurt for a kissing montage that goes on way too long.

The next day, everyone is chilling in their non-yurt hotel rooms. Someone with a southern accent and khakis is talking to producers. “That’s mah gurl,” the mystery man drawls. “I heard this show ended in a proposal and I’m here to get her back”.

For one, I call bullshit that this knucklehead didn’t know the Bachelor ended in a proposal. It’s only been on TV for 60 years. Second, it’s very suspicious that this dude happened to hear his ex was on this show and had enough PTO/cash money saved up to take a few days off and fly down to Peru. The producers, Chris Harrison’s personal agents of chaos, point this dude to Arie’s hotel room. He knocks, and Arie answers “‘sup, dude?”

At this point the camera shows this dude full on. He is very beefy and straining this Men’s Wearhouse summer suit to its limits. This lunk is Ross, Becca’s soulmate/ex-boyfriend, and he’s here to propose to her.

Arie is confused, since he thought Ross worked at the hotel. Also, Ross and Becca broke up a year ago and he’s just now trying to talk to her again? Couldn’t you have texted her at some point over the last year? Ross explains that Becca is the love of his life and he is the only one who can propose to her, because he loves her. It simply took 7 years of a dead end relationship and a breakup to come to this conclusion. Arie is angry, but his angry face looks like his regular face. He can’t stop Ross from talking to Becca (the producers wouldn’t allow it, plus Ross is much younger and thiccer than Arie), so he sort of goes with the flow and Ross goes off to find Becca.

“Apparently you’re not excited to see me,” Ross says. NO SHIT, BUDDY. She steps outside to talk to him, and Ross awkwardly sets the flowers he brought next to Becca. He launches into a speech about how he’s still in love with her and thought that flying to Peru to win her back would totally work. “Do you think your life is a movie? NO.” Becca shuts Ross down and he drags his sweaty self back to the airport.

Kendall goes home. Is anyone surprised? Arie didn’t tell her he was in love with her, so she’s headed back to her taxidermy workshop.

Arie, Becca, I Love You, Kendall, Lauren B, The Bachelor, Week 10

Don’t Say That You Love Me