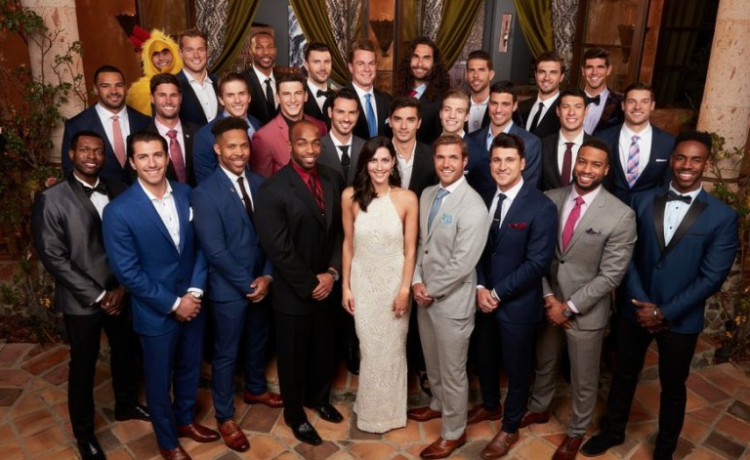 Welcome back to another scintillating season of The Bachelorette. Becca is here to finally find her real true love after being dicknotized by Arie for 8 weeks, only to have her heart broken when he left her for a Real Doll. Luckily Becca’s close personal friends, the former Bachelorettes, are here to give her some sage advice before she begins her journey of lurvvvve. And by sage I literally mean Rachel lights some sage on fire and cleanses the skanky couches and Becca’s pussy of any remaining Arie essence. Hopefully she hit the hot tub with the sage as well (and maybe several gallons of chlorine).

Sadly, the men this year have been shrouded in mystery. We are usually treated to cast bios where the dudes answer simple personality questionnaires with terrifying/stupefying results. This year the producers thought better and wrote generic statements for each dude, meaning that they are all empty vessels at this point. A few promising boyfriends get a behind-the-scenes intro package. These are largely boring (many of the dudes are former pro athletes who love their families, shocker) but a few men stand out. Like Jean Blanc, the cologneisseur! He owns over 100 bottles of fragrance.

BRING ON THE MEN

Chris Harrison greets Becca on the steps of the mansion. “This mansion is yours now!” he tells her, as if she wants to be responsible for the lack of AC and the unflushed toilet of a hot tub. The limos start to pull up and deposit the boyfriends on the curb.

Clay, a former professional football player who loves his family, tells Becca that she’s the “biggest catch of his life” and that he’ll “catch her inside”. She’s charmed by his singular pun.

Then out of the limo comes Leo, shaking out his luscious man bun and looking like a discount version of Jason Momoa. “You have hair like my sister!” Becca squeals. That’s not a promising review for Khal Discount.

Jordan is a male model whose lower eyelash game is ON POINT and did not come to this house to make friends. He’s serving Evangelical megachurch pastor realness in this grey suit and purposely chose clicky shoes so he would stand out in this room full of personal trainers. Jordan is less concerned with meeting Becca than he is reading the other men to filth for wearing ill-fitting suits. Jordan is A MESSY BITCH WHO LIVES FOR DRAMA and I can already tell he’s going to be an absolute treasure in Paradise.

A minivan pulls up and Garrett hops out. He got an intro package where he did a passable Chris Farley imitation, and I fully expected him to do a “I live in a van down by the river!!!” sketch.

Unfortunately, he and Becca examine the van and discover a car seat and soccer balls, because Garrett is #DadMaterial! Somehow, Becca finds this ovary-melting instead of HORRIFYING. Did Garrett steal this van from a nice family in the suburbs? Does he own car seats but not have kids? RUN BECCA RUN.

Inside, the men are shocked that more competitors keep showing up. Jordan gets progressively bitchier about the other mens’ fashion choices and it is delicious!! He’s seeing so many loafers without socks and will not suffer quietly. Put some socks on, you gutter snipes!!

More men arrive, and one of them is dressed like a giant chicken. David, the venture capitalist/chicken, determined that “buckaw!” sounds kind of like “Bec-ca!” and built his whole entrance around that. Becca is into it? OK, girl.

Becca retreats to the inside of the mansion and chats with the guys. Fun facts:

2. Christon was a former Harlem Globetrotter. Not sure what his current job is, but he can still dunk. PICK CHRISTON.

3. Jean Blanc loves things that smell good so much he brings Becca a scented candle. PICK THE COLOGNEISSEUR.

While the men slam Coors Light and refuse to even think about drinking water, the first DUDE FEUD of the season heats up. Chris and Chase are both from Orlando, and Chris knows Chase’s ex. She told Chris that Chase was a dirtbag and NOT HERE FOR THE RIGHT REASONS. Because Chris is truly Here For Becca and not another shady messy bitch who lives for drama, he decides to do the gentlemanly thing and pick a fight with Chase where the cameras can see it. Chase insists that the ex in question was some girl he dated for a month, and you know how women are.

The night drags on and Becca calls out Jake from Minneapolis. Jake looks like the shitty boyfriend from Final Destination and has met Becca multiple times through their mutual friends. She wants to know why he never made a move on her before she was on national TV.

Jake tells her that, to be fair, he only remembers meeting her ONCE before (probably because he was blackout drunk the other times). Becca’s not impressed by his claims of being a hopeless romantic who’s had a transformative year and boots him out of the mansion.

Chris Harrison wakes up from his nap and drops the First Impression Rose on a coffee table. Each of the boyfriends insist that he’s worthy of the rose, but they didn’t bet on Garrett showing Becca how to fly fish in the mansion’s scum pool, just like her dad used to do! Between the minivan and the folksy lesson about fishing, Becca is totally seeing her dad in this dude she might one day smash. Garrett gets the rose and the first kiss of the night.

It’s approximately 8 AM and time to send some dudes home. Chicago Joe appears to be crying, but it might just be exhaustion. Jordan was too busy clocking everyone’s outfits that he didn’t spend a minute with Becca. He can’t go home though, it “wouldn’t be fair to Becca!” THIS BITCH!!!

Khal Discount speculates he’s going home, since he didn’t get one-on-one time and he sticks out as an individual “in a sea of highway patrol officers”. And people say women are the petty and emotional ones!

Becca and the surviving boyfriends all raise a glass to love. It’s 11:30 AM.

Episode 6: The City of Uuuuggghhhh

Two Ambulances in One Episode