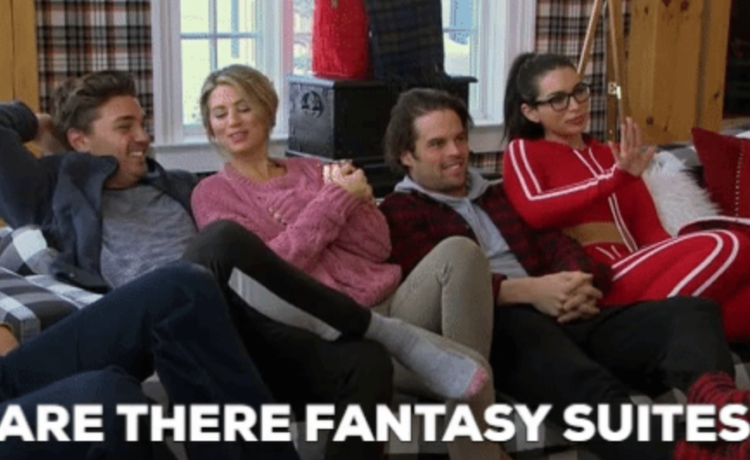 MATH TIME! If there’s an Arie episode Monday, Winter Games Tuesday, the Winter Games finale Thursday (plus an extra hour of a tell-all), and the Women Tell All Sunday, how many hours of the Bachelor franchise am I wasting my life on?

ELEVEN HOURS. If this isn’t evidence that Chris Harrison is a Sailor Moon villain who’s sucking all of our life force out through our TVs, I don’t know what is. To preserve my sanity, all I watched was the THREE HOURS of the Winter Games finale. Sorry guys.

THE FINISH LINE IS IN SIGHT

Chris Harrison fights his way through a blizzard to reach the Winter Games love lodge. Everyone is draped over each other making out, even though it is the early morning and it’s unclear if they all brushed their teeth first. Dean definitely didn’t.

Despite declaring everyone IN LUUUUVVV 10 seconds prior, Chris Harrison tells her to slow her roll on the Fantasy Suites.

Everyone practices their routines off ice, where things fall apart for Bibiana and Jordan. Back at the lodge, they have a collective meltdown over the future of their relationship. Bibiana doesn’t see it lasting and can’t make a commitment to Jordan. She wonders what’s wrong with her, but like, you have only known this dude for two weeks??? It’s fine if you don’t want to date him??? Jordan sadly does the dishes as Bibiana packs her things, and I’m questioning if there’s a working dishwasher in this lodge.

Also, despite being born in 1997, Lily has seemingly traveled from 1977 with her wardrobe of tan bellbottoms and aggressive center parted bangs. She also wears a giant sweatshirt that says “My Grandchildren are as Cute as Buttons”, which is a bold sartorial choice in a world of Lululemon and crop tops. These two crazy kids seem happy together and I want to believe in their sweet TV love.

After a day of skating practice with Nancy Kerrigan herself, Chris Harrison reveals that today is the designated day for sexytimes and that each couple gets a private Fantasy Suite date. Ashley I FREAKS OUT because she is in love with Kevin, a ghost from Canada. Oh, and she’s still a virgin, but miiiiiiiight not be for much longer.

Dean and Lesley decide to use their Fantasy Suite, but they are boring so I got up and grabbed some hummus.

Luke and Stassi have a wine dinner and Stassi is not into the idea of sleeping with Luke. She can’t imagine looking her mother in the eye and not being ashamed of sleeping with a stranger on a TV show. Same, Stassi! Luke is very respectful and they sleep in separate rooms, reuniting in the morning to eat breakfast. Stassi reapplies a full face of makeup with hot pink pineapple pajamas and this lewk is very confusing!

Boy Courtney decides to tell Lily he’s falling in love with her, but is really nervous and comments on the shearling throws their room is covered in. “These are genuine albino gophers,” he jokes. These two goofballs! They both agree that they’re falling for one another, but skip the Fantasy Suite. The next morning, Boy Courtney throws snowballs at Lily’s window and she jokes that she’s calling the cops. YOUNG LOVE.

An eternity is dedicated to Ashley I and Kevin’s Fantasy Suite date. The subject of her virginity is the main focus, despite the fact that he might be a spirit from another realm, much like Patrick Swayze in Ghost. Spectral illusion or not, Ashley I wants to go to the Fantasy Suite with Kevin and he accepts. So, congrats to the happy couple?

The contestants show up to the ice rink for the final event, where a diabolical producer has left them the fugliest skating costumes. Everyone gets a scrunchie to match their outfit. “I have the sex appeal of a wet sock,” Lily notes.

Chris Harrison trots out some poor child to sing the Bachelor Winter Games anthem again, and it’s still awful. Kevin, whose temporary corporeal form is weakening, trips during the practice and busts his knee.

The contestants’ ice dance is much slower and has far more tongue kissing than the real Olympics, although the audience seemingly can’t get enough. Everyone is pretty terrible and makes utter fools of themselves.

Kevin and Ashley I take the ice, and he’s seemingly recovered enough to skate. He also chews gum the entire time. Somehow their performance is judged as the best, and Kevin and Ashley I are awarded the Golden Roses and declared the winners of the Bachelor Winter Games. OK!

THE WORLD TELLS ALL

There were some revelations in the World Tells All special:

Overall, the Winter Games was much better than Arie’s terrible season, which is dragging to its conclusion next week with a FIVE HOUR, TWO NIGHT trashstravaganza. Are you trying to kill us all, Chris Harrison???