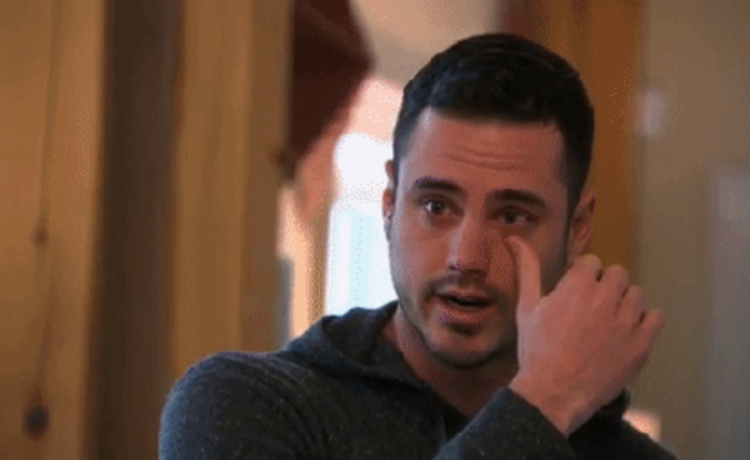 The finish line is in sight for Winter Games – the grand finale is Thursday, followed by Arie’s finale on Monday. Oh, and a Women Tell All special Sunday night. THIS IS ENTIRELY TOO MUCH BACHELOR.

Ben Higgins pulls Yuki around on a sled, and she attempts to return the favor even though he weighs twice as much as her. Friendship is magic! Also, major props to Yuki for going on this show and not being fluent in English. Can you even imagine the mess if any of the American contestants showed up on an international equivalent of this show not speaking the language? I mean, they can barely muddle their way through American Bachelor without saying “like” every other word. There’s drinking games based off of which canned phrases they’ll use, and if you follow the rules you’ll definitely get alcohol poisoning.

Chris Harrison delights in the fact that the ski course is a nearly 3,000 foot death trap. He is hungry for a blood sacrifice. Only 3 of the contestants have ever been skiing, so this isn’t dangerous at all!

Clare is gunning for a date card and sets a strong time right out of the gate. Most of the other women crash into bushes, but Lesley beats Clare’s time at the last minute. Clare is mad that she hasn’t been able to connect with Christian after the ill fated Jacuzzi Appointment, and without the date card their chances of falling in love are slim to none. There’s enough salt here to melt the snow off this hill.

The men don’t fare much better in terms of crashing into fences and shrubs. Boy Courtney points out that some of them live in climates that don’t get much snow, but do get all sorts of freaky ass poison spiders.

Dean takes advantage of his ski experience and nabs the date card, meaning it’s up to him and Lesley to bestow the extra date card on one of the other couples. But which lucky pair?

I missed some of the dates because I was prepping a delicious veggie pesto from Hello Fresh. (Not an #ad or #sponcon, I just legitimately like their meal service!) I’m assuming Dean and Lesley’s low budget winter date went fine because they continue their aggressive canoodling the rest of the episode.

Ashley I’s prayers are answered and she and Kevin get the extra date card. I can’t tell where they are, because all of these mountain lodge fireplace settings are looking the same. Ashley I tells Kevin she’s still a virgin, but he respects her choice to wait. Good answer, thumb! They make out a bunch. At some point a producer sets up a pottery wheel and Ashley I and Kevin recreate the sexy pottery scene from Ghost. WHAT DOES THIS MEAN. Is Kevin dead??

THE WINTER OF OUR DISCONTENT

At this point, everyone in the house has coupled up, except for Tiffany (still don’t know her), Ben Higgins, Michael G (????????????), and Yuki. Tiffany and Michael G know it’s not gonna happen for them, so they head out. Nobody notices.

Ben Higgins is lost in his feelings on a rustic sofa. This process is wearing on his last nerve. He shouts “Are you there, Chris Harrison? It’s me, Ben Higgins” and Chris Harrison appears in a plume of smoke.

Poor Ben. His Bachelor-sanctioned engagement ended in a breakup, but he was really in love! He thought he was ready to date on a television competition again, but he a’int. Chris Harrison nods along as Ben Higgins bravely dries his eyes, says “thank you, brother” like he’s Hulk Hogan, and goes to inform the rest of the house that HE OUT.

Yuki is devastated and sobs uncontrollably. Chris Harrison is not done with his dark bidding and tells Yuki in broken Japanese that she has to leave. “No boy,” Yuki solemnly agrees. She sobs some more as everyone gives her a giant group hug and promises to visit her in Japan. Satisfied with the destruction he’s sown, Chris Harrison poofs into a cloud of bats and flies away.

Wait wait wait wait. Kissing is not an official Olympic sport! Nor does it count as a Rose Ceremony! Harrrissssoooon!!!!

Former Bachelorettes Jojo (ugh) and Rachel (YAAAAAYYYY!!) roll up to watch their sort-of exes mack on new girls. Arie is also here. Each couple has to approach the judge’s panel and make out for a sufficient period of time while the judges grade their connection. Whoever lacks passion goes home. I cannot fathom anything more uncomfortable.

Clare and Christian have some stupid fight and they both leave. Shoulda stuck with Benoit and his glasses, girl!

Lily is wearing a gingham picnic blanket from a Delia’s catalog circa 2002. She makes out with Boy Courtney and gets lipstick all over him. This entire time, Ally is wracked with nerves. She’s trying to smile through it, but you can see her stomach churning as she tries to hold in vomit. She can’t, and has to sprint to the bathroom and retch. Josiah comforts her, but is still like…are we gonna do this or what?

Ally is allowed to brush her teeth and they participate in the kissing contest, but it’s pretty awkward since she LITERALLY JUST PUKED. Everyone else’s kisses are evaluated by the judges and they award the following medals:

That means Josiah and Ally are sent out into the blizzard to go their separate ways. The Winter Games finale is Thursday, and the final event is FIGURE SKATING and it’s coached by Nancy Goddamn Kerrigan herself.