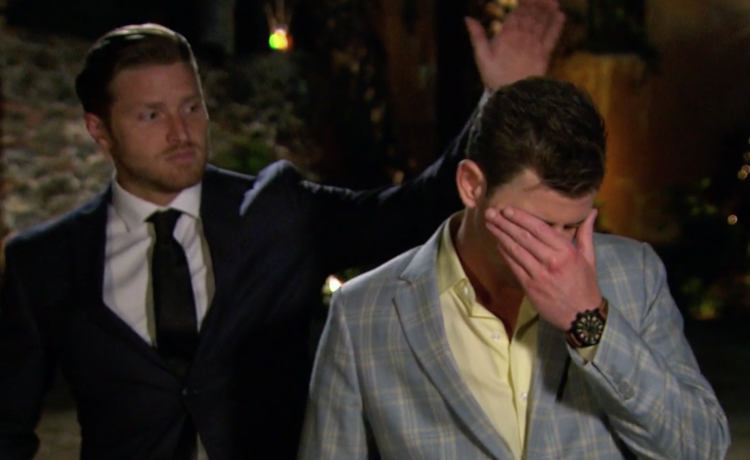 DeMario shows up to the mansion, ready to grovel his way back in. NOT GONNA HAPPEN, GUY. Rachel lives out all of our fantasies as she strides out into the night, looking magnificent in a black and gold gown and a FUR COAT. Life tip: If you break up with someone wearing a FREAKING FUR COAT AND GOWN, you win that breakup.

“I didn’t keep it real with you,” DeMario stammers. “I realized my faults last night, conveniently after I was caught in a lie.”

Rachel manages to listen to him ramble for a few minutes – again, she is literally Wonder Woman for not immediately punching this lying dude into the sun – before she calmly explains to DeMario that there are other men in the house who are here for her, and he can go ahead and keep moving forward with his life–in the opposite direction.

The cocktail party picks back up. Blake E and Whablucas hit the bar hard and try to plead their case to Rachel, but she’s over both of them. I can’t love Rachel more for cutting both these bozos, because if this was any past Bachelorette we’d be stuck in an endless loop of their bickering for the next six weeks.

Dudes who stay and make corny acceptance puns with their names: “You know I Will” “How Kenny say no?”

Rachel sends Blake E and Whablucas packing with an awkward side hug to both. Lucas whaboomed too hard at the bar and is sweating through his used car salesman jacket. He might not know what’s going on! Blake E, however, is cognizant that he is heading home, and he is LIVID.

“I didn’t expect this,” he whines to Rachel. NOBODY CARES ABOUT YOUR STUPID FEELINGS, BLAKE E.

Outside, the producers interview both rejects. Tensions and blood alcohol levels run high, and each guy overhears the other talking shit in their interview. Blake E storms into Lucas’ interview and starts the single dumbest dude fight reality TV has ever gifted us with.

Alex, Bryan, Peter, Will, Fred, and Tickle Monster all accompany Rachel to a taping of Ellen for the first group date. Ellen, the people’s talk show host, gives the ladies in the audience what they want by challenging the men to strip off their shirts and go grind on some grandmas. And grind they do!

Once their shirts are back on, Rachel and Ellen play Never Have I Ever with the dudes.

Later that night, Rachel makes out with Bryan and Peter a whooooole bunch. Fred, who had a childhood crush on Rachel that still consumes his soul (weird!), goes on a mission to kiss Rachel. He takes five minutes to ask her permission for a kiss, and when they finally do, Fred says he can picture Rachel in a wedding gown.

Rachel says kissing Fred was like kissing a little boy. She admits her feelings for him aren’t there and sends him home early, all while holding the group date rose. Alex gets the group date rose instead.

Anthony gets the one-on-one date, and him and Rachel saddle up some horses and go to Rodeo Drive! Which isn’t even pronounced the same as “rodeo”. The date is based on a dumb pun, and they have to ride horses into stores and pretend it’s a thing people do. One of the horses poops in a store. It’s absurd.

The evening portion of the date is pleasant. Rachel and Anthony pretend to eat a dinner on a lovely terrace and Anthony talks about how even though he didn’t grow up wealthy, he grew up “rich in love”. He has a beautiful soul and strong jawline and Rachel is feeling it. They dance to a jazz quartet under the stars. AGAIN, if this was any other Bachelorette, the date would have ended with them awkwardly swaying to some up-and-coming country artist and pretending they liked their music. Rachel is too good for all of us.

The second date card arrives, with a clue about “women taking charge” in a relationship.

“Like a charge card? For shoes? HUR HUR HUR” Whoa, Lee’s got sexist jokes!  Also, in news that should surprise no one, the self-described “southern gentleman” tweeted a whole bunch of racist garbage before coming on the show. HEY PRODUCERS: don’t invite Lee back to Paradise or the after show, ok?

Meanwhile, Eric is brooding because he feels like Rachel hasn’t paid him any attention and that she might like other guys instead. ERIC. DUDE. That’s the entire premise of the show! Some of the other husbands try to explain this to Eric, but he’s pissed and throws a  man tantrum. A mantrum?

Rachel’s #squad from Nick’s season roll up to the mansion and tell the guys they’re in for a wild date. I don’t buy that all of these girls are Rachel’s real besties (cough CORINNE cough) but they’re definitely going to be on Paradise so we should try to remember their faces. Bryce, Brady, Kenny, Lee, Jack Stone, Dean, Adam, Adam’s creepy doll, and other forgettable men all pile into a party bus with a full bar and stripper pole. More grinding ensues!

The party bus dumps them off at a bar where the men have to mud wrestle in a baby pool filled with slop. Kenny is FIRED UP because this is his job (minus the mud). He pile drives Lee and squishes his stupid pompadour, which makes Kenny the winner in my heart.

As the guys are herded out into the alley to rinse off with a hose, Rachel’s friends judge them all. Dean = great! Eric = bad news! The other guys = forgettable!

Armed with that knowledge, Rachel confronts Eric at the night date. He wants to get closer to her, but it’s hard for him to be vulnerable. Lee re-inflates his hair and decides to gossip some more about Eric. During his time with Rachel, Lee insinuates that Eric is dangerous because he…yelled at another guy? Isn’t here for the right reasons? IDK, Lee just sucks and is relishing his time as the villain now that Blake E and Whablucas are gone.

Drama aside, Eric gets the group date rose.

Once again, it’s nearly 9 p.m. and the cocktail party has just started, meaning NO ROSE CEREMONY. The husbands are in their best suits (shout out to Diggy’s vast glasses and bowtie wardrobe) and they’re all getting along fabulously.

Looks like we’re in for another tiresome DUDE FEUD next week.