Remember last week’s wild two-on-one? When Corinne and Taylor “took their fight to the swamp”? Sadly, that storyline is still happening. Taylor marches into the abandoned church where Nick and Corinne are drinking wine and staring at empty plates. She’s not going home without telling Nick THE TRUTH.

Nick and Taylor go to talk outside, and Taylor tries one last time to open Nick’s eyeballs and convince him that Corinne is the blonde antichrist. Nick tells Taylor that his intentions in giving Corinne the rose had everything to do with his dick heart, and that’s the end of that.

Corinne makes out with Nick in a dank alley and crows to the camera that “Cats have 9 lives, but bitches have 2.” SCIENCE!

It doesn’t look like anyone is going to freeze to death at tonight’s rose ceremony, and all of the girls are pumped for the cocktail party. I mean, thank goodness there’s a cocktail party! Extra time to talk to Nick, all the pinot grigio you can drink, and – 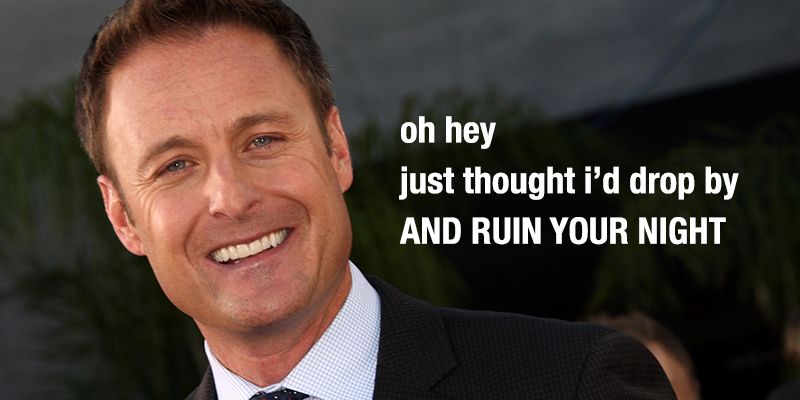 Chris Harrison drops the bomb on the girls that Nick already knows what he wants and no amount of last minute smooching will change his mind. Alexis says what all the girls are thinking:

There’s a scant few roses on the table, and Nick hands them out to Kristina, Raven, Vanessa, Brunette Danielle, Jasmine, and …Whitney?! They’ve never spoken to each other, but being hot goes a long way I guess.

Josephine, Jaimi, and Alexis are heading home. Alexis wonders if she should have opened up more, but I think her strategy of getting wine wasted in a shark costume secured her a spot on Bachelor in Paradise and in America’s heart.

Nick and the girls arrive on St. Thomas. Believe it or not, Nick thinks St. Thomas is ALSO a great place to fall in love! He’s a little apprehensive about this week though, since we’re halfway through the season and he’s unsure about who he should get fake engaged to. He takes a somber sea plane ride and lets his pale, hairy legs air out. The plane swoops by the girls’ hotel and they all recognize Nick, somehow! (Probably the lily white legs).

The plane lands and Nick announces that he’s taking Kristina on a date. They fly off and the rest of the women go back to their hotel suite. Vanessa tries to lighten the mood with fun facts. “Did you know that Denmark used to own this island?” COOL STORY BRO.

Meanwhile, Nick and Kristina enjoy a picnic overlooking the ocean. He asks about her family. She has siblings in the states and siblings in Russia, but hasn’t spoken to her sister in Russia in a while.

Nick: Do you speak Russian?

Later on, Nick and Kristina pretend to eat lobster and drink red wine. She elaborates on her past, and holy smokes is it tragic. Kristina’s abusive mother didn’t keep enough food in the house, so she had to eat lipstick. She then was put in an orphanage for seven years. Kristina made good friends in the orphanage, but then she was adopted and moved the US and never saw any of them again. GOOD GRIEF.

Nick admires Kristina’s strength, honesty, and maturity. He gives her a rose through his tears and they go dancing.

The next day is the group date. Nick figures Vanessa, Blonde Danielle, Corinne, Rachel, Jasmine, and Raven can all hang out on the beach. The producers are thrilled for such a cheap date.

Jasmine hasn’t had any one-on-one time with Nick, and it’s making her unravel. She’s only been on group dates and hasn’t had Nick’s full attention. She doesn’t know whether to tell Nick how much she likes him or punch him in the face. Wait, what?

After several rounds of tequila shots, Nick decides to pit the girls against each other in a game of beach volleyball. Everyone is tense and drunk. Corinne jumps on Nick like a spider monkey. Vanessa and Blonde Danielle stave off tears. Rachel’s competitive spirit ignites and she spikes ball after ball to the other team. It culminates with Jasmine pushing over an extremely tipsy Corinne and Nick realizing that SPORTS RUIN LIVES.

Jasmine’s suffered the indignity of not having a one-on-one date, so she hopes Nick will talk to her first at the party. He gives that honor to Rachel, and Jasmine breaks.

When Nick does eventually talk to Jasmine, she’s seething. “I feel like you’re overlooking me, and I can’t be overlooked. I like you so much! But I just want to choke you right now. haha, kidding! But seriously. You want me to choke you out?”

“I didn’t have the best conversation with Jasmine,” Nick tells the camera. UNDERSTATEMENT OF THE CENTURY.

“Yesterday was a disaster,” Nick tells us. His salmon colored shirt is also a disaster.

Whitney and Brunette Danielle put on their best rompers and take a helicopter ride with Nick to a remote island. Nick decides to talk to Whitney for the first time ever. “You’re really beautiful!” He tells her. This is literally the only thing Nick knows about Whitney.

On the other side of the sandbar, Nick chats with Brunette Danielle and realizes that his relationship with her is more developed (after all, he showed her all the spots in Waukesha where he got laid.) We all know what that means – sayonara, Whitney.

Whitney didn’t think she’d be going home today, but as Nick and Brunette Danielle fly away in the helicopter it dawns on her that this island is her home now.

That evening, Nick takes Brunette Danielle to a historical prison tower on the island. Romantic! They search through the catacombs with a lantern and Brunette Danielle discovers the words “love is forever” written in one of the prison cells. Awwww!

A table is set up for the two. The plates are empty, but Nick looks like he’s experiencing major gastrointestinal distress. He’s learned nothing from his time on Bachelor in Paradise and got very sunburned. It’s not a winning look.

Brunette Danielle prattles on about their relationship – isn’t it great they both like dancing? And each other? And…other stuff? She smiles expectantly at Nick, who looks dead behind the eyes. He wanted to give Brunette Danielle the rose, and wanted to fall in love with her, but just can’t. He calls her an Uber and she’s driven off in tears.

After Nick sends Brunette Danielle home, he breaks down. It could be heatstroke, or it could be the looming possibility that this quest to find love on television also fails him. He just doesn’t know what to do!

In his emotional state, he decides to barge in on the remaining women’s suite (seemingly without a key to their room!) Nick sobs that he doesn’t know if anything is real any more and storms out dramatically.

Everyone is shell shocked. Is Nick really quitting the show halfway through?!

(Doubtful, dude needs to get paid.)