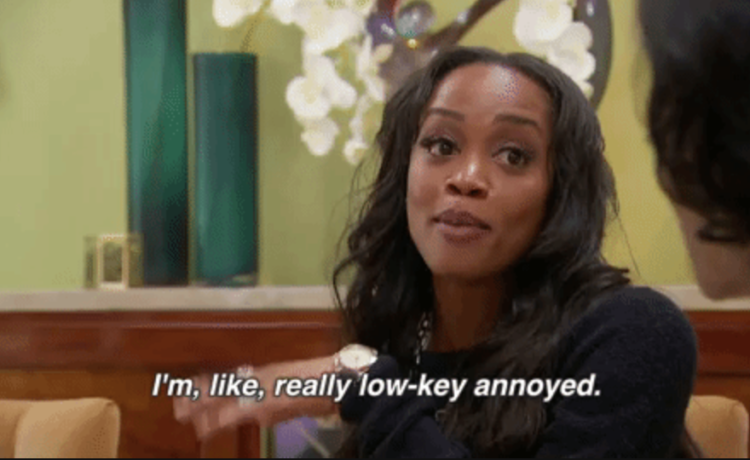 We’re down to the final three guys, and that can only mean one thing. FANTASY. SUITES. Except Rachel decides to change things up on the guys by dropping in on their hotel room and informing them that their flight to boner city is delayed. Her older sister is extremely pregnant and can’t be traveling to any exotic locations to meet these dudes, so they’re going to travel to Dallas and meet Rachel’s family RIGHT NOW. Right now, as in, put your shoes on Peter, you’re about to meet your girlfriend’s family.

Bryan was fully expecting a Fantasy Suite date, and sulks on the hotel couch from the indignity of being cockblocked AND not getting to meet Rachel’s family first.

Peter’s strategy so far has been to date Rachel as if they were a normal couple, vs. two very attractive people under constant camera surveillance and media scrutiny. However, his hesitation to declare that HE LOVES RACHEL 5EVER has put him behind the other husbands, particularly Bryan and his aggressive tongue. Before meeting her family, Peter sits Rachel down and tells her that his feelings are genuine, and maybe possibly someday he might propose to her, although probably not in the arbitrary Bachelorette timeline! Either way,

Peter admits he’s falling in love with Rachel, and she’s like ME TOO!

Peter meets Rachel’s mom, sister Constance, brother-in-law, cousin Andrea, and her aunt and uncle whose names escape me.  Everyone pretends to eat lunch as they grill Peter on whether or not he’s here for the right reasons. The consensus? He is!

The only one who isn’t sold on Peter initially is Constance. Sure, he’s hot, but is he really husband material? He wins her over with his sincere feelings for Rachel – while he might not be ~in loooooove~ quite yet, he can see a future with her and doesn’t want to lose that chance. Plus, Peter draws pictures with Rachel’s small nephew and everyones’ hearts and ovaries grow three sizes because it’s REAL CUTE.

The last person Peter talks to is Rachel’s mom. He tells her that he wants to keep dating Rachel and building a relationship with her, but isn’t ready to ask for her hand in marriage because they’ve only known each other like 4 weeks and she has 2 other boyfriends. Peter’s honesty makes an impression on Rachel’s mom, and she appreciates that he’s taking their relationship seriously.

Overall, Peter makes a good impression on Rachel’s family, shows his feelings for her have grown, AND DID I MENTION COPPER IS BACK?

Eric and Rachel tour the city of Dallas before meeting her family. Meanwhile, Bryan and Peter sit in the hotel suite in uncomfortable silence. This has the makings of a dude feud!

Rachel takes Eric to the top of Dallas’…tall-ish sphere? Their version of the Space Needle? I don’t know what this unsightly structure is, but they ride to the top of it and Rachel shows Eric the skyline. It’s very smoggy! Eric doesn’t seem to be a huge fan of heights, but nothing can kill his good mood and excitement in meeting Rachel’s family.

At the house, Eric introduces himself and Rachel’s family remembers his dance from After the Final Rose. This dance has paid first impression dividends, dude!

Eric is asked about his family, and he explains that even though he didn’t always grow up surrounded by love, he aspires for family togetherness more than anything. Good answer!

The charming dance moves only get him so far with Constance, though. She swoops in and asks if Eric’s ever been in love. Well…not exactly. But he’s falling in love with Rachel! Plus, he really wants to have kids and be a great partner and husband to Rachel. Constance is satisfied with the answer, but then Rachel’s mom steps in to ask how Eric expects to have a happy relationship when he didn’t have a model of one growing up and is inexperienced with being in love.

Eric’s sincerity wins her over eventually – he admits he might not know everything about love, but he’s committed, willing to compromise, and cares for Rachel. He then asks if he’d have Mrs. Lindsay’s blessing if he proposed to Rachel. Her mom is like, “sure, if Rachel’s into it!” which isn’t a resounding yes but a solid enough answer for Eric.

Towards the end of the date, Rachel’s cousin Andrea says that she likes how real and down-to-earth Eric is. He’s not a fairy tale boy who is unwilling to face reality and put in the work to make a relationship thrive. Speaking of fairy tale boys, though:

Bryan puts on the fancy Swiss watch Rachel “bought” him and leaves Eric and Peter at the hotel. He’s 100000% confident that he’s going to wow Rachel’s family. Their journey has been a fairy tale of love and roses and surely her family will recognize that he is perfect for her.

Peter is not wowed by Bryan. “I don’t get Bryan’s Miami swagger. Down there, they’ve got the fake boobs, fake butts, fake cheeks*.”

*I don’t know where it originated, but word on the blogs is that Bryan has cheek implants.

Rachel and Bryan have brunch with two of her girlfriends, who are asking the tough questions:

Friend: You look so young for practicing medicine for 8 years ARE YOU REALLY A DOCTOR*

*not really, he’s a chiropractor

Overall, Rachel’s friends give Bryan the thumbs up, which inflates his confidence even more. He’s convinced that he’s going to nail this family meeting, but makes several grave errors:

Bryan tries to reason that he’s fallen in love with Rachel on an expedited timeline, as if love was something you can have shipped to you from UPS. Her family is not catching what he’s throwing. Undeterred, Bryan tells Mrs. Lindsay he WILL be proposing to Rachel. She’s unenthused.

Also unenthused? Rachel. However, she’s more pissed at her family’s questioning of Bryan. She’s still 100000% dicknotized by him and he sticks around some more.

After meeting Rachel’s family, everyone flies to Spain for FANTASY SUITES. Eric is up first and he and Rachel literally skip to a helicopter that carries them to a monastery overlooking the ocean. It’s gorgeous and they are loving the scenery and each other. Rachel tells the camera that every minute she spends with Eric just gets better, and this date backs it up! They dine in a castle courtyard and Eric talks about all of the high points in their relationship (hometowns, the hot tub) before telling her that he is in love with her. That’ll get you a Fantasy Suite card! Rachel asks Eric if he wants to do this and he replies that he’s ALL IN FOR THE WIN.

Peter is next in line for a romantic overnight date. He and Rachel go to a vineyard, where an old man in a beret pours them wine and sings a song in Spanish about dying for love. OK! There’s so much wine! Rachel wants to press Peter further on whether or not he plans to propose to her at the end of this thing, but they are interrupted by an adorable toddler. Then they hop into a giant barrel to stomp on some wine grapes, but really just end up kissing a whole bunch.

Later that evening, Peter shows up for dinner in a double breasted suit and he! is! pulling! it! off! Things are off to a good start, until Rachel brings up the proposal again. Peter explains that he only wants to propose ONCE, and that single proposal should ideally lead to a lifetime of marriage. Rachel didn’t come this far to leave with a boyfriend, she wants A RING. They’re at an impasse, and we get a big ol’ TO BE CONTINUED.