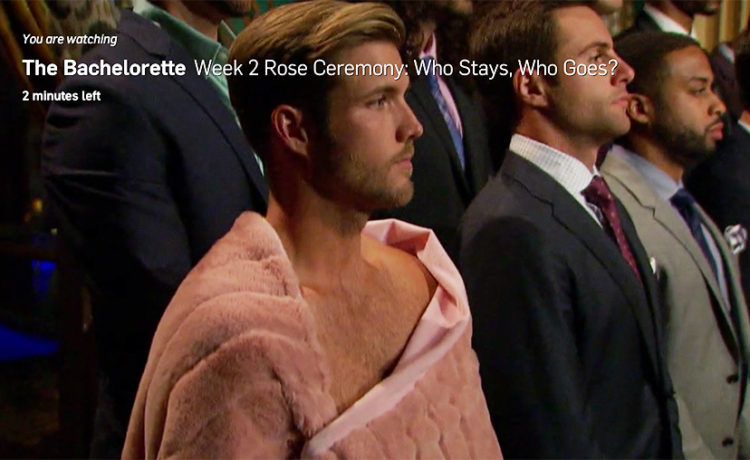 Week 2 kicks off with a group date card arriving for Clay, Chris R (side note: why the R? Does Christon also go by Chris, or is there another generic dude here I missed?) David the Chicken, Lincoln, Connor, Nick (???), Jordan, and Jean Blanc. The men meet Becca at a model home and get to play dress up in tuxedos. Jordan is confident that he’s NAILING this challenge because wearing clothes is his JOB.

Becca has a twist in store for these boyfriends: they have to run an insane wedding-themed obstacle course to win her as a wife. Just like the olden days! Rachel and Bryan show up to fulfill their contractual obligation to the franchise and explain the rules. The final obstacle involves finding a ring in a wedding cake without using your hands (PUKE), because as Rachel explains, Becca needs to see WHAT DAT MOUTH DO. The men throw themselves into the competition, but during the bit where they soak in a barrel of ice water, Lincoln cheats. By leaping out of the barrel a half second earlier, he cinches the lead and fake marries Becca right there. You all know where this is headed, right?

Later that evening, Becca and the boyfriends sit poolside and pound some drinks. Becca gives Lincoln a framed photo of the two of them at the challenge. Lincoln is OVERJOYED. No one has ever been this happy over a hastily printed out photo stuck in the cheapest frame the producers could find at Target. He sets the picture out where all the other bros can see it and spends the evening talking to it. He’s being extra and Connor IS NOT HAVING IT. Its an injustice Lincoln cheated at the challenge, and now he’s rubbing his prize in Connor’s big dumb face! There’s only one way to settle this like adults, and Connor and Lincoln have a productive conversation about good sportsmanship and humility.

Connor chucks Lincoln’s photo into the pool. There’s a sound effect of glass shattering despite it landing in water. Theory: does the Bachelor Mansion exist on a plane where the laws of gravity fade as reality becomes more fleeting and tenuous???

Becca has to play kindergarten teacher and console a crying Lincoln while scolding a douchey, unrepentant Connor. I would have cut both dudes right there for this foolishness, but Becca decides to just make out with Jean Blanc, give him the rose, and call it a night.

TURN DOWN FOR WHAT

Becca chooses Blake for the one on one date the next day. They hop in a limo and drive to the part of LA where CSI films all the murder scenes. Chris Harrison greets them at a warehouse holding a sledgehammer. Becca and Blake get to smash all kinds of shit that reminds Becca of her relationship with Arie (champagne, the couch he dumped her on, a fish tank). Lil Jon is here too.

Obliterating her past memories is cathartic for Becca. Blake is mainly happy to swing a hammer and meet Lil Jon. Over a dinner of a single butter lettuce leaf and glass of Merlot, Blake shares that he too was blindsided by a breakup but is excited to pursue a new relationship with Becca. Lil Jon should have showed up at this dinner, because it is BORING.

The remaining boyfriends get to ride a school bus to the second date. I recognize none of them except for Khal Discount and his man bun. They’re going to play dodgeball with some children. The men think that the drills the kids are making them run will be easy, but they don’t realize that they’re in the presence of evil child actors.

“YOU GUYS ARE TURTLES!” screams one child. The boyfriends are all so sweaty from trying to run laps and dodge the balls the kids are launching at them from some sort of sports ball torture rig. It’s disgusting.

“TRAAAAAAAASH” another child yells. These kids are the MVPs.

The date culminates in an even sweatier dodgeball final at a trampoline park. Fred Willard shows up again for some reason and he looks terrible! Where’s Lil Jon?!?!

After everyone showers (hopefully) it’s on to the drinking bit of the date. Garrett is still so, so sweaty. Becca cuddles up with Wills. We learned last episode Wills is a big Harry Potter fan, and between his cute smile and fancy business suit track pants, Becca’s under his spell. TEN POINTS TO GRYFFINDOR.

Colton, who is named after guns, is nervous. He’s got a big secret that he needs to tell Becca. He used to date Tia, another veteran of Arie’s season. And by date, he means they hooked up for a weekend once. Becca is NOT PLEASED to hear this. Could it be that Colton is Not Here For Her?

Wills gets the rose.

EVERYONE IS STILL SO GD SWEATY since the Rose Ceremony is imminent. Jordan decides to unleash his secret weapon and get naked for Becca. Naked except for a pair of dress shoes, of course.

I’m not an expert, but if a girl laughs out loud when you approach her nearly naked, your odds are not great! Jordan is oblivious to everything but himself and his perfect hair. David the Chicken confronts him and says his stunt was disrespectful to Becca and the other dudes, but Jordan observes his underwear is “very close to swimwear”, so chill out, chicken.

The producers make Jordan wear a blanket to the Rose Ceremony.

Sadly, Rickey and two other dudes go home. Who are they? We will never know.

NEXT WEEK: “Cheers to being a bitch”.

BIP: Welcome Back to Garbage Island